Surgical management for burns has been reported to effectively manage such cases via early excisions and grafting to enhance re-epithelization. However, the operation is very expensive and not be suitable for many patients, especially those suffering from extensive body burns across huge surface areas. Recombinant human granulocyte-macrophage colony-stimulating factor has been validated to effectively manage severe burns, resulting in favorable outcomes and minimal or absent adverse events. Recombinant human granulocyte-macrophage colony-stimulating factor should be used for the management of such patients due to the favorable events that have been extensively reported among studies in the literature. Some of these events include reducing the healing time and increasing the rates of wound healing among burns patients, when compared to other treatment modalities. Additionally, various studies have also demonstrated that no significant adverse events are associated with it, adding to its efficacy in the management of deep burns. However, it should be noted that further research is still encouraged to further validate the current evidence, and to validate the effect on scarring. Further details are discussed within the manuscript.

Burns are serious events that can have a significant threat to the affected patient’s life, particularly for patients living in low socio-economic countries (1). The clinical significance of burns and risk of increased morbidity and mortality is more significant for severe burns, which usually require critical care. The increased mortality risk among these patients is usually attributable to the abundant release of cytokines and inflammatory mediators which can impair the different physiological processes within the human body (2). A reduced quality of life of the affected patients is also a potential outcome, especially in cases of severe and deep burns which usually damage the epidermal and dermal reticular layers leading to hypertrophic scar formation and skin deformities (3, 4). Reduced natural immunological functions of the skin may also facilitate bacterial invasion leading to more complications such as ulcerations and even sepsis (5). Therefore, approaches to the care of such events have been intended to effectively manage these patients to enhance the outcomes and improve the quality of life.

Surgical management has been reported to effectively manage these cases via early excisions and grafting to enhance re-epithelization (6-8). However, the operation is very expensive and not suitable for many patients, especially those suffering from extensive body burns across huge surface areas (9). Among the medical management modalities that have been proposed, recombinant human granulocyte-macrophage colony-stimulating factor (rhGM-CSF) has been validated to effectively manage severe burns with favorable outcomes and minimal to absent adverse events (9). The favorable effects are usually attributed to its efficacy in promoting the proliferation of the hematopoietic progenitor cell within the bone marrow in addition to its role in mature cells transfer to the peripheral blood. It can also enhance the immune response to burns and promotes wound healing as a result of inducing the proliferation of monocytes and macrophages within the affected tissues (Figure 1) (10-13). Many studies in the current literature have evaluated the efficacy and safety of rhGM-CSF in promoting wound healing in critical care settings. In the present literature review, we aim to discuss the role of rhGM-CSF in wound healing in the critical care setting. 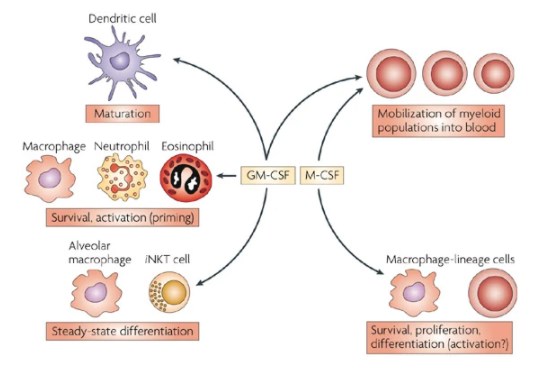 To assess the efficacy of rhGM-CSF, safety must also be evaluated as it can significantly impact patients’ outcomes. Among the different studies in the literature, some have evaluated the safety of the compound when applied to manage extensive burns. Most of the included studies did not report any significant adverse events or complications following the administration of rhGM-CSF (9, 13, 20, 22-25). However, some adverse events and application-site reactions were observed among some patients in some studies. For instance, the investigation by Liu et al. (23) reported that five of their patients that were treated for their wounds with rhGM-CSF had more swollen and redder skin than observed in the patients in the control group. Moreover, they also indicated that three patients had simultaneous painful sensations around the wound area, and another two patients had pain, swelling, and slight redness. A further clinical trial by Liu et al. (22) also reported that a total of 44 patients out of their 2257 included population developed some adverse events, which primarily included painful sensations at the wound site. It is worth mentioning that other studies validated the administration of rhGM-CSF for other uses than wound management, like idiopathic pulmonary alveolar proteinosis, metastatic melanoma, and for critically-ill patients with impaired neutrophil phagocytosis, and no significant adverse events were reported among these studies (26-28). This indicates that rhGM-CSF is safe, in addition to being significantly effective, and therefore, its use should be encouraged in the future and be more implied in a wider clinical field.

A meta-analysis by Breederveld et al. (29) concluded that using recombinant human growth factors was significantly associated with reduced healing duration when compared to the control group. Furthermore, although no adverse events or infections were noticed, they reported that hyperglycemic was significantly higher in the growth factor adult population than the control group, while this significance was absent among the pediatric population. This was further indicated in the updated review by the same authors in 2014 (30). In a clinical trial by Wang et al. (24), the authors reported that the duration of healing was significantly longer in the control group than in the rhGM-CSF one, and the estimated median rate of healing significantly increased at 8, 14, 20, and 28 days from the inauguration of the studies (Figure 2). 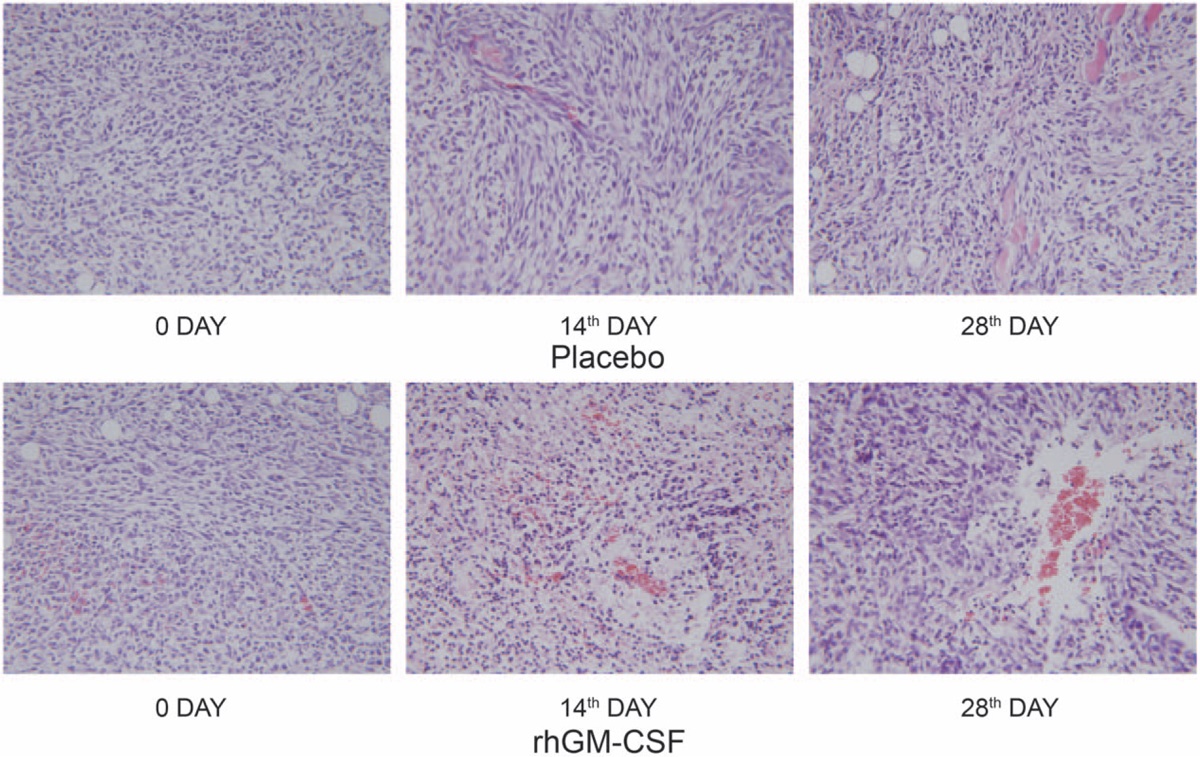 In 2020, a meta-analysis was published by Li et al. (31) that analyzed the results of seven randomized controlled trials with 982 included patients who had suffered from excessive burns. They indicated that the use of rhGM-CSF was significantly associated with a reduced healing time for burns in the treatment group patients, when compared to the control groups. Additionally, they also estimated that the rate of wound healing within the rhGM-CSF group was significantly higher than in the control group from the time the trials were inaugurated and at 7, 10, 14, and 20 days. On the other hand, the pooled analysis by the authors showed that no significant difference within the healing time was noticed between the control and the rhGM-CSF groups at 28 days from the initiation of the included trials. A further identified outcome was the non-significant difference between the rhGM-CSF and the control groups in terms of mean vascular endothelial growth factor (VEGF) and fibroblast growth factor (FGF) from the day when the trials began, up to day 14 (31). This may be attributable to many factors, including that rhGM-CSF efficacy is only limited to shortening the healing period and that the modality is most effective within the earliest phases of the disease while the efficacy may decrease during the late stages. However, no evidence regarding this information has been validated in the literature. Accordingly, further research must be encouraged to further investigate which factor is responsible for wound healing regulation across the different time intervals following the administration of rhGM-CSF for managing severe burns, as it is difficult to draw solid evidence and conclusions based on the findings from the present investigations in the literature. Scarring is not also adequately reported and investigated among studies, and therefore, future investigations should consider this point for further validation of the effects of rhGM-CSF when managing severe burns. However, it should be noted that in the previous investigation by Yan et al. (20), they used the Vancouver scar scale of pigmentation, and the results indicated that rhGM-CSF had significantly superior scores than that of the control group. Despite this, further evidence could not be obtained from other studies, and therefore, it is difficult to make a solid conclusion.

Recombinant human granulocyte-macrophage colony-stimulating factor should be used for the management of moderately to severe burn patients due to the favorable events that have been extensively reported among studies in the literature. Some of these events include reducing the healing time and increasing the rates of wound healing among burns patients as compared to other treatment options. Additionally, different studies have also demonstrated that no significant adverse events are associated with the administration of this method, adding to its efficacy in the management of deep burns. However, it should be noted that further research is still required to further validate the current evidence, validate the treatments’s effect on scarring, and to further understand the effects on vascular endothelial growth factor and fibroblast growth factor.

All data are presented within the paper.