The future career choices of medical students are influenced by the medical school curriculum and exposure they receive in the schools. A thorough understanding of the students’ knowledge and perception about a specialty like plastic surgery is essential for assessing the scope and career choices. This study evaluates the medical students’ knowledge and perception of plastic surgery in the western region of Saudi Arabia.

This is a cross-sectional online survey study that was conducted using a pre-tested questionnaire which was distributed between senior medical students. The questionnaire recorded participants’ sociodemographic details, their knowledge about the specialty of plastic surgery, and their perception of the specialty. The data collected were subjected to Statistical analysis using SPSS Ver.23 and a p-value of < 0.05 was deemed significant.

Around the world, plastic surgery has gained fame in the last two decades. Plastic and reconstructive surgery is a specialty that deals with the treatment of parental or acquired tissue abnormalities to improve the appearance and function of different parts of the body (1, 2). It is a flexible discipline in which surgeons conduct several various cosmetic and reconstructive procedures (3). Some primary care doctors, nurses, medical students, and the public appear to have very little knowledge of plastic surgery and a bad view of it (4). Plastic surgery is a wide, dynamic, and developing specialty field not limited by anatomy or organ system. Many sub-specialties are available within plastic surgery domain, including breast surgery, hand surgery, pediatric plastic surgery, skin cancer, craniofacial trauma, trauma reconstruction, oncology reconstruction of ophthalmic eye surgery and others (5, 6).

This is a cross-sectional study which was conducted between January 2021 and July 2021. The study was done through an online survey which was distributed through social media groups among the communities of medical students. We included all male and female undergraduate medical students between third and sixth year of medical schools from the western region of Saudi Arabia. Meanwhile, we excluded first year medical students, second year medical students, interns and incomplete submissions. A pre-designed questionnaire was distributed online that included 25 questions divided into three main domains. The first was participants’ demographics that included age, gender, region, place of residence, university, educational level, academic GPA and nationality. The second domain was to assess their knowledge regarding the specialty of plastic surgery, and their perception about the specialty. That included areas of self- evaluation, interest in rotation, concern, cosmetic impression, the importance of plastic department, the source of information and the financial and risk issues. The third section will contain three case scenarios to assess the knowledge regarding specific plastic surgery procedures. The study was approved by the research ethics committee of the directorate of health affairs. Data were analyzed using Statistical Package for the Social Sciences (SPSS) version 25. Qualitative data was expressed as numbers and percentages, and Chi- squared test (χ2) was applied to test the relationship between variables. A p-value of <0.05 was considered as statistically significant.

Meanwhile, the most common source of information regarding plastic surgery was the internet (59.6%) (Table 2). Regarding the relationship students’ gender and academic level, female participants were more likely to know about plastic surgery in comparison to male students (p-value = 0.034). However, there was no significant relationship between gender and academic level and their knowledge level (p-value = 0.384) (Table 3).

Regarding the relationship between students’ gender and their perception about plastic surgery, a high number of female students reported that their biggest concern about being a plastic surgeon is being a competitive specialty (P-value = 0.001). Similarly, those who thought that plastic surgery is expensive and is meant for rich and famous was statistically significant when compared to male students (p-value = 0.04) (Table 6).

Students at Jeddah University had a significantly higher percent of those who were interested in plastic surgery compared to students from other universities (p-value < 0.001) (Figure 1). Students at King Saud Bin Abdulaziz University had a significantly higher percentage of those whose biggest concern about being a plastic surgeon is that it is a competitive specialty (p-value < 0.001) (Figure 2).

Figure 1. Relationship between students’ college and if they are interested in plastic surgery

Figure 2. Relationship between students’ college and their biggest concern about being a plastic surgeon

Figure 3. Relationship between students’ college and if they think plastic surgery and cosmetic surgery are the same 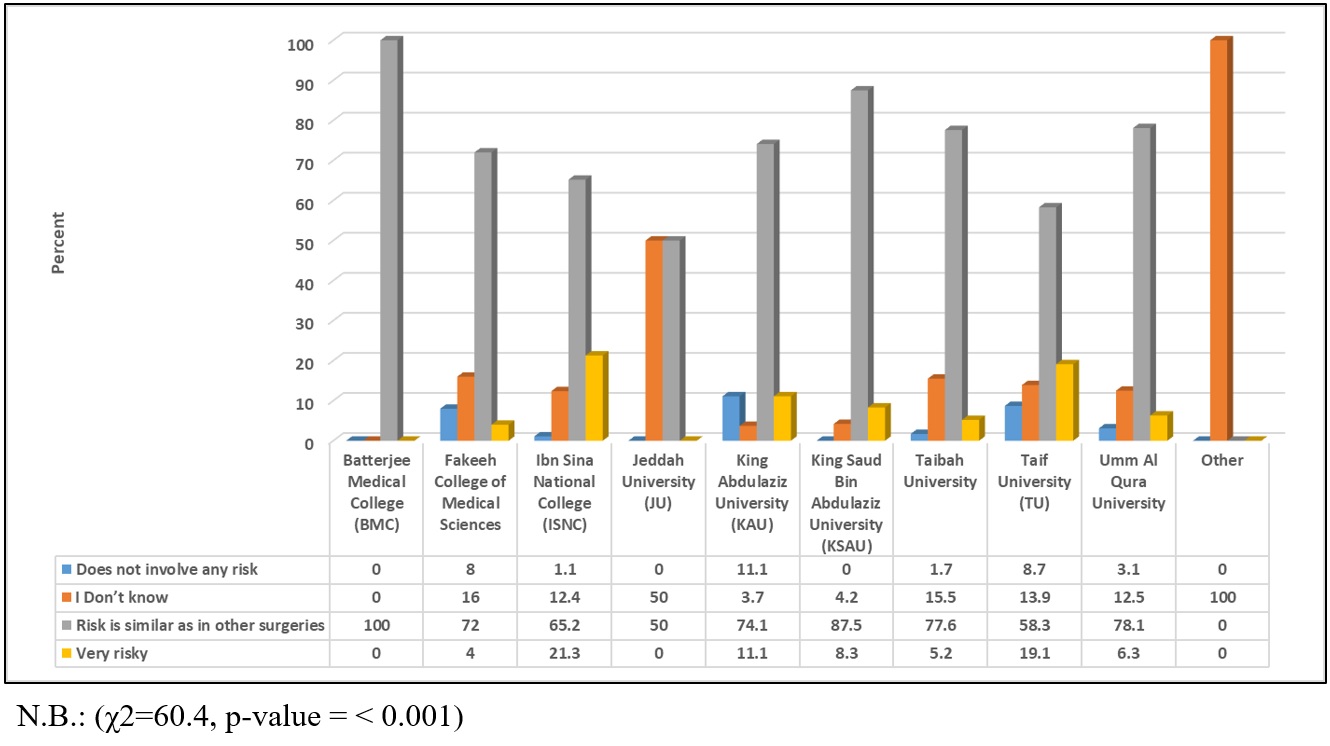 Figure 4. Relationship between students’ college and if they think plastic and cosmetic surgeries are very risky

In Saudi Arabia, there are limited training options for plastic or reconstructive surgery (16), and it would be advantageous to learn the medical students' attributes, characteristics, and other factors that influence their decision in pursuing this surgical subspecialty. Thus, our study explored the knowledge and perceptions of plastic surgery among medical students pursuing their degree in the Western region of KSA. The study findings showed that the majority of the students reported that they have little knowledge regarding this specialty. A recent study done among undergraduate male medical students in one of the universities in Saudi Arabia showed that 68% of them reported good knowledge regarding plastic surgery (14). Approximately 89% of the students agreed that they took rotation in plastic surgery during their internship. In Saudi Arabia, to get a residency seat for plastic surgery, applicants should have above-average academic achievement and a high number of scientific publications (17). The female students showed significantly higher knowledge about this subspecialty than male students in this study. This finding is also reported in other studies done by Mortada et al. in Jeddah, Saudi Arabia (18). The possible explanation for this could be that females are more concerned about body appearance and cosmetics than males (19). This would have made female students inquire and acquire more information about plastic surgery and think of it as a career option. It may be more difficult to develop a competitive application if students do not have good knowledge about the specialty. Efforts should be made to allow students to attend more clinical rotation in the plastic surgery department and clinics early in their training period, a time where students have more time on their hand for a better understanding of plastic surgery and its career opportunities.

In this study, only 34.1% of students were interested in taking plastic surgery, and this lesser interest can be related to poor knowledge about this specialty and its opportunities or due to the high competitiveness of the specialty. It was also found that students belonging to a few schools showed greater interest in taking plastic surgery as a career option after graduation. This could be explained on the basis of differences between schools in exposure to plastic surgery during undergraduate medical training (20). There is a need to restructure the formal teaching methods in plastic surgery, and this should include a brief but broad overview of this specialty during the first two years of undergraduate medical training. The curriculum could include didactic lectures, workshops for skill developments, computer-assisted learning, mandatory rotations in plastic surgery clinics during clinical years, or a combination of the above strategies (21). Regardless of which teaching modality is used, students should be formally assessed on what they learned as this would motivate them to transform their understanding to its application. Also, students should be encouraged to participate in case-based learning related to plastic and reconstructive surgery, which can be another effective way to improve the understanding of the specialty. One of the issues faced in this regard is that surgical specialties are facing difficulties in converting the considerations of students into genuine interest. It is reported that students who were interested in surgery during their undergraduate training were more stable in retaining their choice for residency in surgery (22). Therefore, efforts should be made by focusing on student groups who are career-malleable and inquisitive about plastic surgery, as this could lead to a higher probability of continuing on to a plastic surgery career. This is supported by other studies, which report that early exposure to surgical specialties could positively influence career choice (23, 24). Evidence also shows that resident mentoring and role modeling could increase the students' perceptions and career choices (25, 26). The study findings highlight that there is a misconception about plastic surgery among medical students as the mainstream media displays it as synonymous with cosmetic or aesthetic surgery, which could influence the attitudes of students who have not attended clinical rotations or had enough exposure to this specialty. The inclusion of plastic surgery in the undergraduate medical curriculum is also a controversial and debatable topic, and evidence shows that this specialty is underrepresented in the curriculum in most medical schools (27). This study signifies the need for the incorporation of plastic surgery into the curriculum as this does not increase the knowledge regarding the specialty but also improves the students' clinical decision-making skills.

One of the major limitations of the study is its cross-sectional approach as these involved only medical students from the western region of Saudi Arabia. Therefore, the knowledge level and perceptions are not representative of all medical students in the country. Secondly, we didn't assess the actual exposure and training that student received in their respective institutions. And finally, our findings were based on self-reported responses, which could have resulted in social desirability bias.

The study findings showed that the knowledge and perception about plastic surgery are not that satisfactory among medical students. The poor understanding of the specialty's significance and its future opportunities could have made most medical students not to consider it as a carrier option. Students should be more exposed to clinical rotation in plastic surgery departments for better outcomes. Resident mentoring and role modeling could also improve the students' perceptions and career choices.

The study was approved by the ethical committee of directorate of health affairs in the western region with approval number A01171 and registration number H-02-J-002.

The survey used in the study is found within the supplementary materials.